After an extensive testing period, the U.S. Navy announced July 1 in an Initial Operational Test and Evaluation report that its new patrol and reconnaissance aircraft, P-8A Poseidon, was found “operationally effective, operationally suitable, and ready for fleet introduction.” 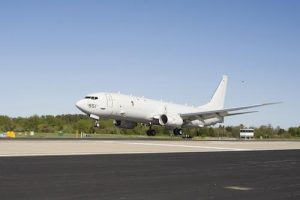 “This milestone and accomplishment is possible due to the great team of individuals who worked diligently and meticulously in making this aircraft the best choice to replace the Navy’s current workhorse, the P-3C Orion,” said Capt. Scott Dillon, Maritime Patrol and Reconnaissance Aircraft Program Office (PMA-290) program manager. “It is a great day for the Navy and the fleet. We are proud to add the P-8 to the Navy’s weapons inventory and the deployment cycle later this year.”

This announcement of completing IOT&E follows another major program milestone last month, the successful firing of the Harpoon from the P-8A, which resulted in a successful target strike.

The successful completion of the initial operational testing period was a key milestone that will inform the full-rate production decision.
With the program passing IOT&E, the P-8A program continues to be on track for an initial operational deployment this winter when the first P-8A squadron will deploy with P-3 and EP-3 squadrons.

Brandywine Communications is a supplier of Time and Frequency Equipment for the P-8A Poseidon.